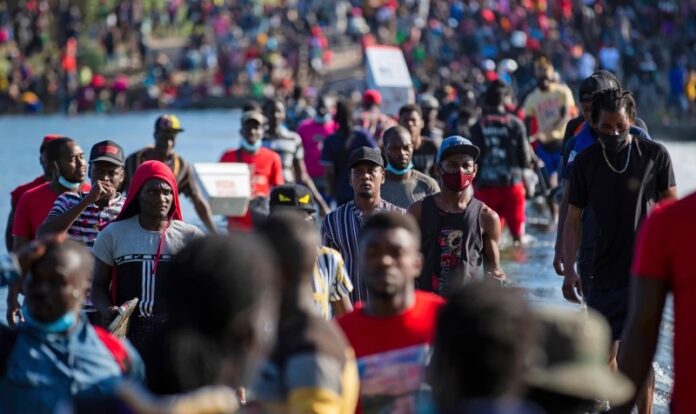 The camp set up under the international bridge that connects Ciudad Acuña, in Coahuila, with the Texas city of Del Río, went from hosting 14,000 Haitian migrants to 230 in just a few days.

Two academics from El Colegio de la Frontera Norte (El Colef), who closely followed the Haitians, chronologically recounted how in a matter of days authorities on both sides of the border were closing in on the group, reducing it to less than a quarter of a thousand and encapsulate it in a ballroom with capacity for a thousand people.

After about 2,000 Haitian nationals were sent back to the Caribbean country and around 8,000 returned to Mexico voluntarily, a growing number of migrants have chosen to stay at the Mexican side of the U.S.-Mexico border for a transitory peaceful and safe life.

So far, more than 500 Haitians have temporarily settled in Ciudad Acuna in the Mexican state of Coahuila, where they said they feel calmer and safer compared to risking their health and safety to illegally enter the United States.

Milo, a Haitian migrant who only gave his first name, said he has temporarily dropped the mind about crossing the U.S.-Mexico border. “Now what matters to me is to have papers to be able to work well here,” he said.

During the past weeks, there were tens of thousands of Haitian migrants crossing the Rio Grande river between the city of Ciudad Acuna and Del Rio, a border city in Texas, trying to seek jobs and asylum in the United States. The number of migrants surged this year following the devastating earthquake in August, the still raging pandemic, as well as the political turmoil after Haitian president’s assassination.

Since early September, a total of estimated 15,000 migrants have camped out under the Ciudad Acuna-Del Rio International Bridge. After a large-scale action of deportation, the U.S. Department of Homeland Security said on Sept. 24 that there were no migrants remaining at the camp under the bridge in Del Rio.

Milo and his brother are currently living in a makeshift camp in Ciudad Acuna, where they and hundreds of other Haitians eagerly await the arrival of personnel from the Mexican Commission for Refugee Assistance (COMAR).

In the camp, the majority of the Haitian migrants have come in family groups, many with children between one and five years old.

The Haitians are free to come and go as they please, with surveillance reinforced by the National Guard, and have access to health services, a cafeteria, and a recreation area with soccer balls and other equipment.

The number of Haitian migrants on the border has increased since last year, with people making several thousand-kilometer journey through the Caribbean and South and Central America on foot or by bus.

The Joe Biden administration has faced widespread criticism for its handling of the increasing number of migrants at the U.S. border with Mexico, especially the controversial use of Title 42, a Trump-era border policy that allows for the swift expulsion of migrants at the border.

Mexican Foreign Minister Marcelo Ebrard told the Senate on Sept. 28 that Mexico could give refuge to some 13,255 Haitians. This week, the Mexican government sent the first voluntary return flight to Haiti with 70 citizens of that country.

Officials from the COMAR reported that some 19,000 Haitians have applied for asylum between January and August this year, well over the combined number of asylum requests from Haitians in 2019 and 2020 that saw about 6,000 applications in both years.

The data from the COMAR also showed that only Hondurans account for more asylum applications than Haitians in Mexico, with 77,000 from January to August 2021, which was a 10 percent increase from their previous record in 2019.