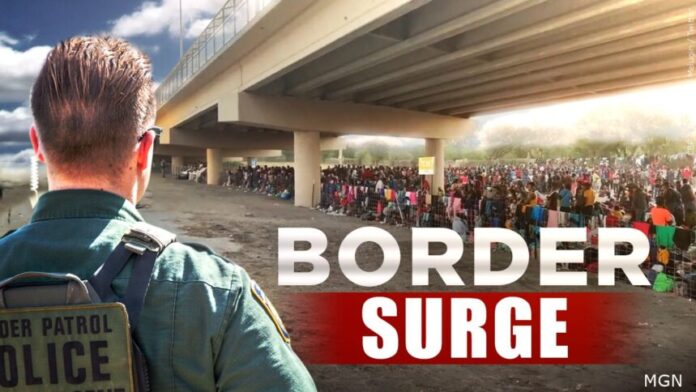 Agents place a tape to prevent the passage to a dam that migrants use to cross into US territory.

DEL RIO, Texas.- The United States closed its border with Mexico in Del Río, Texas, this Sunday in an attempt to stop the entry of migrants in the place, where thousands of Haitian migrants have established a camp.

Almost a score of Texas Department of Public Safety vehicles were parked on the bridge and the river where for about three weeks the migrants had been crossing from Ciudad Acuña in Mexico to Del Rio, Texas. The agents placed yellow tape to prevent the passage towards a dam that the migrants were using to cross into US territory.

A Mexican policeman on his side of the border indicated that the migrants will no longer be allowed to pass. The officer did not want to give his name.

At the same time, the US authorities began to repatriate this Sunday some of the thousands of Haitians who are there.

Many of the migrants have lived in Latin America for years, but are now seeking asylum in the United States, as economic opportunities in Brazil and other nations disappear. Thousands of them have been living under a bridge in Del Rio, a city on the Texas-Mexico border.

Many of the migrants have said they will not be deterred by US actions. Others say they cannot return to Haiti due to instability in the country following the recent earthquake and the assassination of President Jovenel Moïse.

“There is no security in Haiti,” said Fabricio Jean, a 38-year-old Haitian who came to Texas with his wife and two daughters. “The country is mired in a political crisis.”

The first official explained that the operational capacity and the approval of the landings by the Haitian government will determine the number of flights. Both officials spoke on condition of anonymity as they were not authorized to speak to the press.

Large numbers of people came and went across the Rio Grande on Saturday, re-entering Mexico to buy water, food and diapers in Ciudad Acuña, before returning to camp in Texas.

Junior Jean, a 32-year-old Haitian, watched as people crossed the river with their supplies on their backs and the water on their knees. He commented that for the last four years he has been living on the streets in Santiago de Chile, rummaging through the garbage to eat.

“We are all looking for a better life,” he said.

Haitian Prime Minister Ariel Henry wrote on Twitter this Sunday that he is concerned about conditions in the camp, and that Haitians will be welcome back.