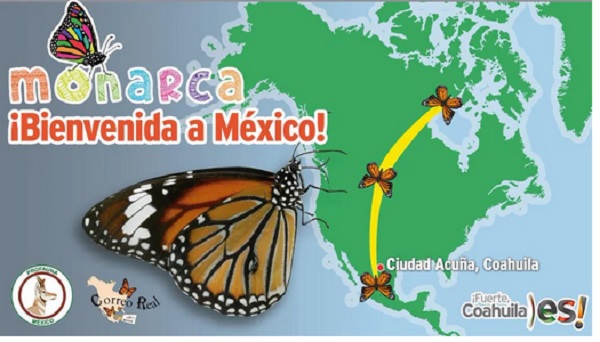 The phenomenon of migration of the monarch butterfly is at risk of disappearing, due to factors such as the decrease in plants and the use of glyphosate.

The first monarch butterflies (Danaus plexippus) of the autumn migration have entered Mexico after crossing the Rio Grande in Ciudad Acuña, Coahuila, where at the same time there is a migratory crisis never seen before in that city that borders Del Río, Texas, and where around 15,000 Haitians came together to cross the same river to the United States in search of asylum. As every year, volunteer observers who participate in the Correo Real citizen science program, reported the first sightings of the insect in Braulio Fernández Park, which has access to a stretch of the Rio Grande and where this time hundreds of Haitians take refuge from the patrol border, with the warning from the city council to be evicted from the site due to its proximity to the international bridge.

For the Monarch butterfly, this site has been identified as the first overnight and feeding point upon arrival in the country, so the first observations are made among the trees of that park. For now, the volunteers identify only a few dozen butterflies, but the bulk of the migration is expected to enter the country with the entry of the fifth and sixth cold front into the country, said Roció Treviño, coordinator of the Royal Mail. Yesterday, the observer Nereyda Barrios reported 15 Monarch butterflies flying or perched on walnut trees in Braulio Fernández Park, around 7:00 p.m., one of them with a broken wing. In the morning, teacher Leticia Avendaño reported the sighting of monarchs feeding on flowers from the Las Vacas stream; while Roberto Carlos Armendariz Ulloa reported observations in the city throughout the day:

The monarch butterfly migration phenomenon is at risk of disappearing, due to various factors, such as the decline in the plant it feeds on in its caterpillar stage, due to the use of glyphosate in the Texas corn belt; in addition to climate change and deforestation in their hibernation sites, where the lowest level reported was recorded in the 2013-2014 season, when the monarchs only occupied 0.67 hectares of forest. In 1992, the Profauna de Coahuila organization implemented the Correo Real initiative to contribute to the conservation of the migratory phenomenon of the Monarch, a program through correspondence letters in which teachers from various schools in the entity reported their observations of the insect,

Monarch butterflies travel more than 4 thousand kilometers from Canada and the United States to spend the winter in the forests of central Mexico in the Monarch Butterfly Biosphere Reserve, forests that also infiltrate the Cutzamala System for more than 4.1 million people in Mexico City and its metropolitan area.

Through the Free Trade Agreement, the Commission for Environmental Cooperation (CEC) has committed since 1996 to expand cooperation initiatives between the governments of Canada, Mexico, and the United States to improve the conservation of the Monarch Butterfly.

Saltillo, Coahuila is the third safest city in Mexico

Out of 14 thousand, only 230 Haitians remain in Ciudad Acuña, Coahuila