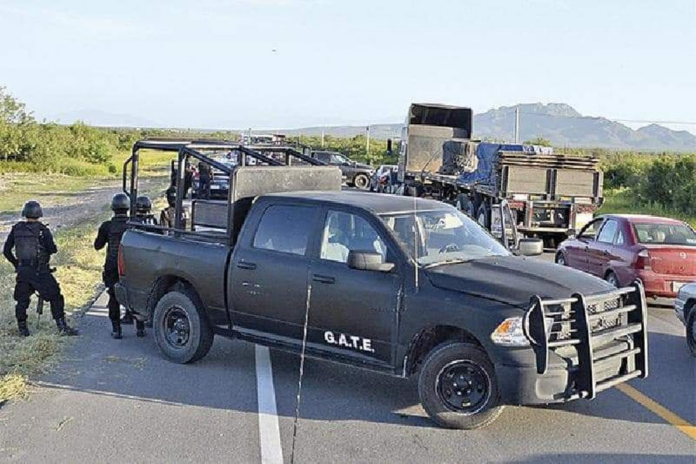 Army agents and Coahuila police officers killed nine alleged members of the Northeast Cartel after two clashes in the municipality of Hidalgo.

According to the official report, elements of the Coahuila Security Secretariat were patrolling the highway gap that leads from Anahuac to Colombia, when they were attacked by armed civilians on the afternoon of September 16.

The attacks were repelled and support was requested from the Secretariat of National Defense (Sedena), who deployed operational actions and found the probable members of the criminal organization.

When they were cornered, the alleged hitmen unleashed a second shootout and there they were killed. The first attack was registered at 3:15 p.m.

As preliminary results, two vehicles were secured, one of them with artisanal armor known as a “monster”, in addition to 10 rifles, including a .50 caliber Barret-type war weapon.

“A coordinated search operation is being carried out to locate the rest of the aggressors, ” the state government said in a bulletin.

These actions were implemented by elements of the Northwest Operation, where state police participate as prominent military forces in Nuevo León and Tamaulipas. Agents from the municipalities of Guerrero, Coahuila and Hidalgo also took part in the clashes.

Unofficial reports indicated that elements of the Sedena and Coahuila comb the area in helicopters. Hence, an increase in the number of deaths derived from these events in the next few hours is not ruled out.

In the last month, the Northeast Cartel has tried to extend its power from Tamaulipas and Nuevo León to Coahuila to control Eagle pass and Colombia border crossings but has run into security forces.

On August 25, for example, a command of at least 30 trucks from that criminal group tried to enter the Coahuilense entity, through the municipality of Hidalgo, but when they were repelled by local police they fled to Anáhuac, Nuevo León. There were three officers injured by this crash.

Hours later, the  Attorney General of the State of Coahuila reported that during a second confrontation between alleged hitmen and elements of the Army in that state,  three criminals were killed, who are presumed to be members of the Northeast Cartel.

One day after the attacks in Hidalgo, alleged members of the same organization attacked elements of the  Nuevo León Civil Force and one of the agents lost his life.

Around 2:00 p.m., Central Mexico time, an attack on security personnel by armed civilians was reported on the Agualeguas highway, on the border with the town of  General Treviño.

The subjects were aboard two vans, a red Suburban, and a gray RAM. When they met with uniformed men, they opened fire. The State  Secretariat of Public Security confirmed the death of the operative element,  José Eduardo Hernández Rojas, and wished his relatives condolences.

According to the records, the  Northeast Cartel emerged in 2015, after the arrest of  Omar Treviño Morales, the  Z-42.

In the succession, there were differences, as his brother,  Juan Francisco Treviño Morales, wanted to assume the vacant leadership of the so-called cartel of the last letter. The organization was fragmented into  Zetas Vieja Escuela  and  the Northeast Cartel,  currently commanded by Juan Gerardo Treviño Chávez , the  Huevo Treviño.

El Huevo Treviño is the top boss of the Northeast Cartel (Photo: Special)

The cell that currently registers various attacks in Tamaulipas and Nuevo León has an armed wing known as the  Tropa del Infierno.

One of the top leaders of that armed wing, Fernando “M”, the Werko, was arrested in Nuevo Laredo, Tamaulipas, on August 10, and after 17 days, the Attorney General’s Office linked him to trial. Another of the Northeast Cartel lieutenants, known as Martín Rodríguez Barbosa, the Cadet, was also arrested in Nuevo Laredo earlier this month.