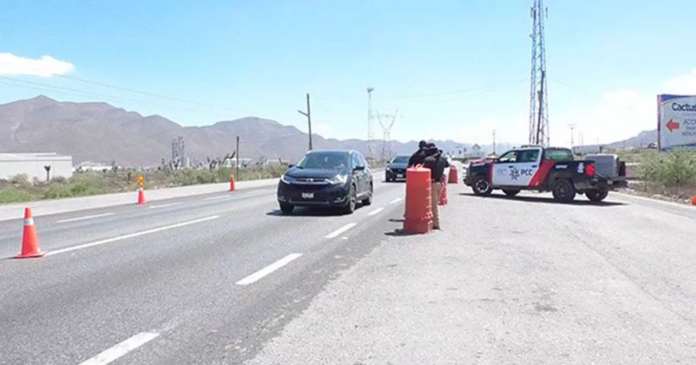 After the arrest of 4 alleged kidnappers of a truck driver, elements of the Secretary of Public Security of the State reinforced surveillance.

Saltillo, Coahuila.-After the arrest of four alleged kidnappers of a trailer on the Monterrey-Saltillo highway, elements of the Secretary of Public Security of the State reinforced surveillance at the entrance filter to the city located at said point.

According to the security elements, the instruction is to thoroughly check all the cargo units that travel with more than one crew member on board or that seem suspicious, in order to avoid the commission of any crime and guarantee the safe passage of truckers across the state.

Elements of the Municipal Police of Ramos Arizpe also participate in the checkpoint, which in coordination with state corporations monitor one of the main entrances to Coahuila, in addition to having the presence of a canine binomial for the detection of drugs.

So far there have been no incidents of insecurity, only tourists who voluntarily stop their march in search of guidance regarding the destination to which they are traveling.

More victims of the gang of the four highway robbers appear, who were arrested this Friday by police authorities of Coahuila, after a persecution. Another truck driver from San Luis Potosí recognized these same thieves as the ones who robbed him two weeks ago.

This Friday it was announced that after the pursuit of a trailer with a report of theft, he was arrested on the Monterrey-Saltillo highway. There they rescued the driver, handcuffed in the cabin, and arrested the assailants Roberto, Víctor Jerónimo, Juan Manuel, and Cristian, natives of Nuevo León, who remained at the disposal of the Public Ministry.

But now there are more victims of that same gang of trailer hitters. One of them, named Pablo, recognized in the photographs that were published in Zócalo Saltillo, two of the detainees as the same ones who assaulted him two weeks ago.

He said that on that occasion he was leaving Monterrey, heading for San Luis Potosí, and at kilometer 49 of the Monterrey-Saltillo highway his trailer broke down and he stopped, waiting for support from his company. But while that was happening, the thieves intercepted him.

“Around 7:30 two men arrived, they got out of a Tsuru, they forced me to open the doors, they entered and began to beat me, they took my wallet, the money I had, my cell phone, and they began to rummage everything to find more money. They took the keys to the trailer,” explained Pablo.

He says that the beating intensified because upon realizing that the trailer was broken and they were not going to be able to steal it, before getting off the heavy unit, one of them pulled out a pistol and pointed it at him.

After being helped by other fellow truck drivers whom he asked for help, he arrived at the checkpoint located at the entrance to Ramos Arizpe and was able to return to his native San Luis to recover from the blows. However, he assures us that there are more victims.

“A colleague told me that it also happened to him, on that same stretch, but that time there were more colleagues, they all got robbed, and I understand that there were more victims, because they told us not to stop there,” shared.

He finally stated that he intends to file a complaint against criminals, and calls on other victims to do so too, to be prosecuted and judged, and not leave jail.