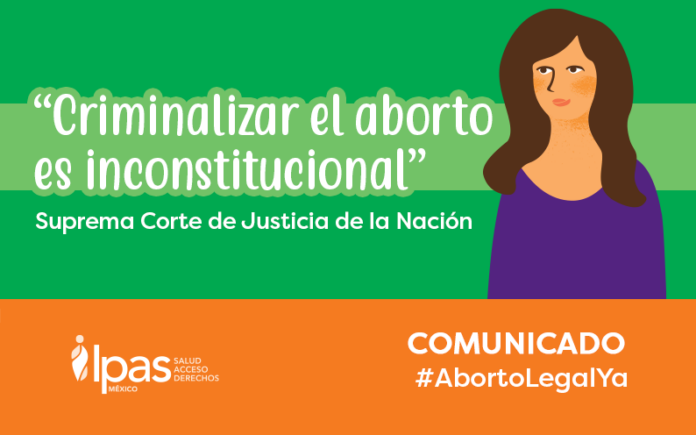 Never again should a woman or a person with the capacity to carry a child be criminally prosecuted. Today the threat of imprisonment and the stigma that weigh on people who freely decide to interrupt their pregnancy are banished, ”he said.

In a unanimous vote, with 10 votes, the Plenary of the Supreme Court of Justice of the Nation ( SCJN ) declared the criminalization of abortion unconstitutional, so the criterion is now mandatory for all judges in the country.

The Plenary of the SCJN restarted this Tuesday the discussion on the criminalization of abortion in Coahuila in which eight ministers had already spoken yesterday for declaring this type of measure unconstitutional.

To translate video from a foreign language:

This Tuesday it was the turn of three of the 11 ministers to issue their pronouncements on Luis María Aguilar Morales’ proposal to declare article 196 of the Penal Code of Coahuila unconstitutional, which establishes up to three years in prison for those who abort voluntarily.

However, Minister Jorge Mario Pardo Rebolledo was not present due to “force majeure”, as explained by the Minister-President of the SCJN, Arturo Zaldívar.

Minister Ana Margarita Ríos Farjat highlighted in her speech that the federal Constitution does not prohibit abortion and that its punishment translates into a sanction for the exercise of rights such as human dignity, autonomy, the free development of personality, equality legal, health and reproductive freedom.

“In light of the Constitution, which does not prohibit abortion, can the State punish it? By punishing it, it sanctions conduct rooted in a series of rights possessed by women and by people with the capacity to carry a child, and who participate in the decision to abort, such as the right to human dignity, autonomy, and free development of the personality. , to legal equality, health, and reproductive freedom. In other words, sanctioning the voluntary interruption of pregnancy implies a limit to all these human rights ”, he pointed out.

“The pregnant person is criminalized, without being constitutionally defined if life is invariably protected from conception and what is the treatment of the embryo in the legal world,” he added.

For this reason, he voted in favor of the proposal of Minister Aguilar Morales, whom he urged to deepen more on the weighting of the right to decide and the right to life.

Minister Luis María Aguilar Morales, who carried out the project, highlighted the will and disposition of his colleagues in the Court to build the proposal, “with a human rights discourse and above the difference of opinions and criteria.”

“Today the threat of prison that weighed on people who decide to voluntarily interrupt their pregnancy is banished,” he emphasized.

“We showed that together we can add up in favor of the human rights of Mexican women and men. For this reason, based on this decision, our country, in this Constitutional Court, has raised the rank of the protection of human rights to one of its greatest extensions, ”declared Aguilar Morales.

Arturo Zaldívar said that “today is a historic day for the rights of all Mexican women and pregnant people.”

“Starting today is a watershed in the history of the rights of all women, especially the most vulnerable. With this unanimous criterion of the Constitutional Court, not only are the norms that were the subject of discussion invalidated but also a mandatory criterion is established for all judges in the country.

“From now on, it will not be possible, without violating the criteria of the Court and the Constitution, to prosecute any woman who has an abortion in the cases that this Constitutional Court has considered valid.

“From now on, a new route of freedom, clarity, dignity, and respect for all pregnant women, but especially women, begins. Today is one more step in the historic struggle for their equality, for their dignity, and for the full exercise of their rights.

“This Constitutional Court demonstrates once again, with the facts and with its judgments, that its only commitment is with the Constitution and with human rights,” said Arturo Zaldívar.

This Monday, eight ministers of the SCJN spoke out for annulling the criminalization of abortion in Coahuila, established even for cases of rape. The analysis of the matter continued today with the pronouncement of three more ministers.

With the eight votes announced this Monday, it was enough to declare unconstitutional article 196 of the Penal Code of Coahuila, which establishes penalties of up to three years in prison for women who perform abortions voluntarily.

The Court issued this statement when resolving the unconstitutionality action presented by the former Attorney General’s Office (PGR today FGR) against the Penal Code of Coahuila, for which the resolution issued by the ministers has the effect of eliminating article 196 that provides up to three years in prison for women who have intentional abortions.

The project was carried out by Minister Luis María Aguilar Morales who presented it to the Plenary on Monday and at the beginning of his presentation clarified that his proposal is not about defending the right to abortion but the right of women to freely decide about their lives.

“There is no place within the jurisprudential doctrine of this Constitutional Court, a scenario in which the woman cannot consider the dilemma of continuing or interrupting her pregnancy for a short period of time at the beginning of pregnancy, since this would be equivalent to assuming that their dignity and personal autonomy can be modulated and restricted based on assumptions based on a social construct that, rather than independent women, configures them as instruments of procreation, ”says the project endorsed by the Court.

“There is no room, to annul the right to decide, a paternalistic stance that supports the idea that women need to be” protected “from making certain decisions about their life plan, sexual and reproductive health, since this approach entails a disregard of women as a rational, individual and autonomous being, fully aware of the decisions that – according to their life project – are the ones they consider most convenient ”.

It should be noted that this ruling will have general effects throughout the country, in such a way that women of any state who resort to the interruption of pregnancy in its initial stage cannot be punished.

Article 196 of the state Penal Code, without excluding the cases in which women have the right to decide, established penalties of between 1 and 3 years in prison against women who interrupted their pregnancy.