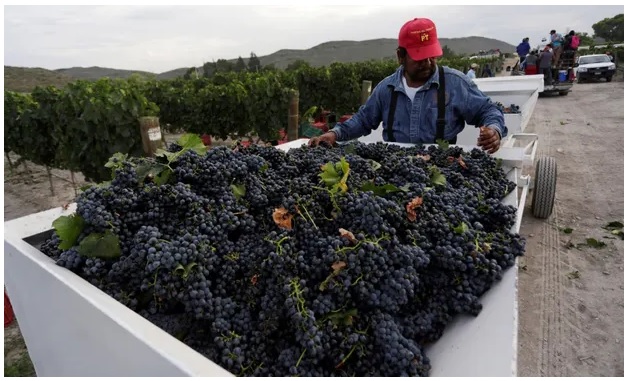 From the patio of his winery high in the north Mexican desert, David Mendel surveys vineyards spread across a bowl-shaped valley under a scorching afternoon sun.

Mountains shade the vineyards in the morning and the late afternoon – creating a short window of the intense daytime heat. After dark, the altitude of 2,100 meters sends temperatures plunging.

“Grapes need hot conditions as much as the cold so there’s a very slow maturation process,” says Mendel, director of Viñedos Don Leo.“If you put these two things together, you get really good quality fruit.”

And that means really good wine, too.

Vineyards are blooming in the desert of Coahuila state, where the wine business is burgeoning in a revival of a tradition dating back more than 400 years.

The Valle de Parras now forms part of a tourist trail christened “vinos y dinos” – wine and dinosaurs – which winds its way through the desert landscape, taking in vineyards and a paleontology museum.

The oasis town of Parras de la Fuente is home to the oldest still-functioning winery in the Americas, Casa Madero, which was founded in 1597.

Spanish producers were hostile to competition from the new world, however, and successfully petitioned King Felipe II to prohibit the planting of vineyards in the Americas and ban imports. Those restrictions lasted two centuries and prevented the development of a wine culture in Mexico, historians say.

Workers collect grapes during a harvest at Casa Madero, which was founded in 1597. Photograph: REUTERS

Farmers focused on growing grapes for brandy production, but in the 1970s many ripped up their vines after the drink fell out of fashion, said Francisco Rodríguez, a former head winemaker with Casa Madero.

“Nobody wanted to invest in vineyards 20 years ago,” he said.

The one exception was Casa Madero, whose owners sent Rodríguez to France in the 1970s to study winemaking. Their early efforts were not totally successful, however.

“Nothing sold,” said Rodríguez. “Mexicans didn’t accept it because they didn’t think there could be quality Mexican wines – and they didn’t even want to try it.”

‘Mexicans didn’t accept it because they didn’t think there could be quality Mexican wines – and they didn’t even want to try it.’ Photograph: David Mendel

Don Leo – named for David Mendel’s father, Leo Mendel, who fled Nazi Germany in 1938 – was among the first to jump into winemaking, bottling its first vintage in 2006.

The Valle de Tunal lies at the end of a long road lined with cactus, mesquite, and date palms Water is piped in from a deep well 6km (3.7 miles) away.

“This valley is difficult,” Mendel says. “But with the quality you get here, it’s worth the difficulties.”

Traditionally, Mexican wine has not been known for its quality. The best-known brand was Sangre de Cristo – Christ’s blood – often used for communion wine. Its sweetness appealed to the Mexican palate and the perception was “it took away their sins”, joked Rodríguez.

But tastes changed over time – and so did the quality.

“Mexico is a little behind in quantity,” said Manuel Negrete, head of the Mexican sommelier association. “But one of the good things about Mexican wines is we have a focus on quality.”

Consumption still lags at roughly 1 liter per capita annually, Negrete says, but consumption has tripled over the past decade.

“It’s hard now to find a restaurant without a Mexican wine on its wine list.”

Prices remain on the high side, mainly due to low production and a lack of government support. Mexican authorities also “tax the heck out of it”, said Heath.

Still, regions such as the Valle de Guadalupe in Baja California have become known internationally. Now attention is turning to other parts of Mexico – such as Rancho El Fortín, a patch of Coahuila vineyards nestled in the mountains near the Texas border.

Winemaker Roberto Díaz flew into the site for the first time in 2013. He confessed that as he descended into the rugged mountainous region he thought: “What am I getting into?”

But he found a plot with potential for growing varietals like syrah, malbec – and especially merlot – which he says resembled a cabernet sauvignon from Chile.

He also found an opportunity to make his mark in a young industry – which is now drawing winemakers from around the world.

“In another country, it’s impossible to get a project like this at age 26 and be in charge of something so large,” he says.

‘Twenty-five years ago, you wouldn’t find a Mexican restaurant that would have a Mexican wine on its wine list.’ Photograph: REUTERS/Alamy

Lucía García, 29, had barely paid attention to Mexican wines before becoming the winemaker at Parvada, a project of homes and vineyards on the outskirts of Parras de la Fuente.

García, who is from Salamanca, Spain, was working in Chile and planned to take a position in Germany.

But her partner joined a winery in Coahuila and called her to say: “This is the future. This is where the big projects are.”

That future worries some in Coahuila, a parched region where competition for scarce water reserves has grown more acute in recent years.

Local farmer and activist José Luis García Valero has worked with Campesinos for decades and watched their water dwindle. Over a lunch of carne asada and tequila – he doesn’t drink local wine – he recalled a litany of projects with competing plans for local water reserves: a massive industrial and residential development, a toxic waste dump, and organic agriculture projects.

“Opening a winery looks a lot prettier than these other projects,” he said.

Looming over any industry in the scorched Coahuila desert is the spectre of climate change. Rancho El Fortín harvests grapes three weeks earlier than when Díaz arrived in 2013. The seasons are also “becoming similar”, he says – winters stay warm.