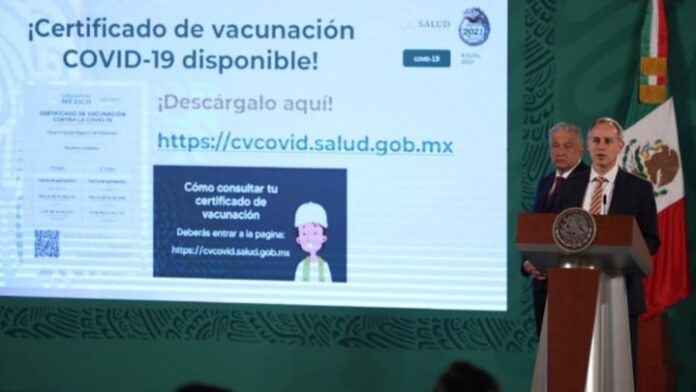 Here we tell you which are the states where the vaccination certificate will begin to be requested to access public establishments.

Mexico is experiencing a third wave of infections due to Covid-19, and the state authorities of several entities of the national territory have begun to announce the new measures that citizens must follow to stop the spread of the virus, among the new guidelines is the vaccination certificate.

The state of Sinaloa is the only entity that has an epidemiological red light and for this reason, the health authorities announced that as of August 2, citizens living in the municipality of Mazatlán will have to present their vaccination certificates in commercial establishments such as bars, restaurants and among others.

In the state of Sonora, the vaccination certificate will be an essential requirement for residents and tourists, as business personnel will ask for the QR code to give access to their establishments.

Since last July 22 in the state of Quintana Roo, one of the tourist entities that has presented more cases of Covid-19 infections and its variants, they will have to show the vaccination certificate to be able to walk through shopping malls, bars and Hotels. The health authorities of this entity will be a little more flexible because if the certificate is not available, the PCR test will be accepted.

In Coahuila, specialized personnel in the field have already started meetings to implement the vaccination certificate as an essential requirement to have access to establishments and even the stadium

Queretaro and Durango are contemplating implementing the program as well.

As of this Tuesday, the COVID-19 Vaccination Certificate is available; In addition, all people over 18 years of age can now register to receive the biological against the SARS-CoV-2 virus, it was announced during The Health Pulse.

In the morning press conference headed by President Andrés Manuel López Obrador, the Secretary of Health, Jorge Alcocer Varela, affirmed that the National Vaccination Strategy works effectively. Currently, the advance is 37 percent and it is expected that in October the entire adult population living in the country will have at least one dose.

Secretary Alcocer Varela reported that the arrival and distribution of vaccines made it possible to immunize three million 394 thousand 082 people last week.

The Undersecretary of Prevention and Health Promotion, Hugo López-Gatell Ramírez, detailed the steps to follow to obtain the COVID-19 vaccination certificate, which is an official proof to show that the person has received the vaccine.

López-Gattel Ramírez explained that this document is especially useful to those who have the need or opportunity to travel to other countries since some maintain restrictions for unvaccinated people.

He clarified that the vaccination certificate should not serve to condition the human right of access to work. It is appropriate and could be legal in certain circumstances to request the person to be vaccinated against COVID-19, but it is not appropriate for an employer in Mexico to request it and that it is a condition for hiring, “it would be contrary to Mexican laws.”

The document can be downloaded at https://cvcovid.salud.gob.mx/, it is only required to have at hand the Unique Population Registration Code (CURP). It contains the type of vaccine received, the date of immunization, and a QR code that allows verification in real-time by any immigration or other authority since it retakes the registration of the Mexican Government database, he said.

He also informed people over 18 years of age that for registration in the portal https://mivacuna.salud.gob.mx it is necessary to have the following information: CURP, entity, municipality, postal code, telephone and contact email.

On the situation of the SARS-CoV-2 virus in Mexico, he said that there was an increase of 22 percent in the number of estimated cases compared to the previous week and that the active cases registered are 39 thousand 889. He also reported that said increase has not affected hospital occupancy, which shows the importance of vaccination in reducing serious cases of the disease.

He indicated that in Mexico there is the third rebound throughout the entire epidemic, after half a year of reduction, only now deaths and hospitalizations have not increased at the same speed, “hospitalization grows more slowly and has remained in 15, 16, 19 percent ”.

Likewise, he announced that this and the following two weeks Mexico will receive a limited supply of biologicals from Pfizer-BioNTech, because, as the pharmaceutical company informed in advance, the plant located in the United States will enter into the reconversion process to expand to four times its vaccine production capacity, a situation similar to what happened in February at the Belgium plant. Due to this, 232,830 doses of Pfizer will be received this Wednesday, and the arrival of one million from Sinovac is expected.