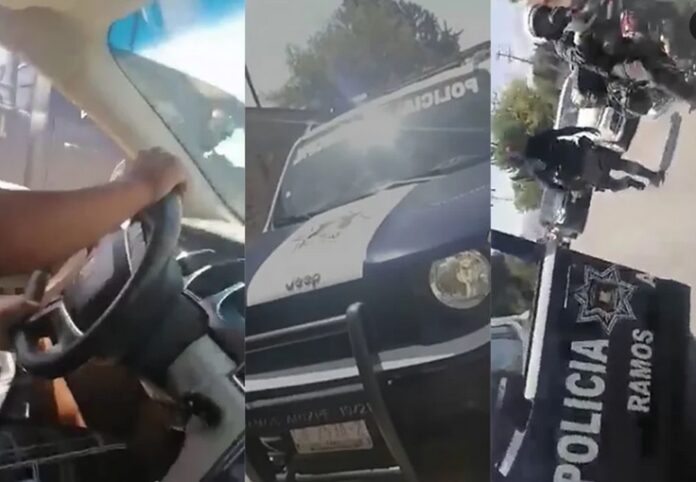 A video released on Tuesday, July 27th on social networks shows a car chase in which a truck with logos of the Coahuila Criminal Investigation Agency (AIC) collides with a vehicle driven by a civilian, who is accompanied by a woman and a child, to stop the driver.

According to the version of the woman who was in the passenger’s seat, who recorded the video and said she was the driver’s partner, the events occurred on Sunday, July 25th, in the afternoon on Miguel Ramos Arizpe Boulevard, near the Capellanía neighborhood, in Ramos Arizpe, Coahuila.

In the video, it is observed how a unit with the logo of the police corporation hits the left side of the car, while the officers shout”stop the car!” The police truck blocks the road, however, the man at the wheel does not slow down, makes a maneuver in his right lane, and accelerates.

Given this, the woman who records the situation with her cell phone exclaims to the driver: “Andrés, please”, but he continues to drive. About 30 seconds later, the driver is heard telling her: “record them, record them!”, To which she responds: “yes, I’m recording”.

In the middle of the persecution, a baby is heard screaming in fear.

Finally, 50 seconds after the police vehicle hits the car, the driver decides to stop. The truck pairs with him and the officers demand him to get off the car, and as soon as he steps out of the car, he is subdued by the alleged police officers who immediately start to beat him up.

“Why are they hitting him like this?”, the woman’s voice can be heard while she continues recording the whole scene, and she is heard screaming at the state police officers, “They damaged our car, they are beating up Andrés, they are taking him away, why is this happening?”

The video continues with the woman making accusations that the people who stopped the driver are hitting him; however, that cannot be seen in the video.

The last scenes only show how a few meters back, the people who got out of the truck, who wear uniforms similar to those of state police corporations, have subjected the driver of the car.