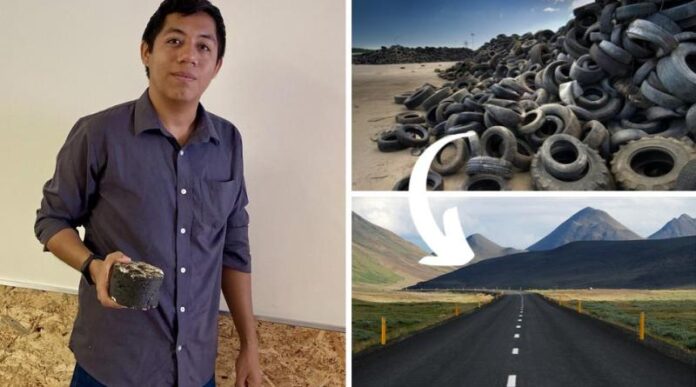 Thanks to a young Mexican, the potholes could disappear forever. And it is that this created a pavement that is able to regenerate when it come into contact with water and that, in addition, is made from recycled materials.

This project was created by Israel Antonio Briseño who studied Civil Engineering at the Autonomous University of Coahuila, Mexico. The name of the project is “Paflec”, a pavement made with reused roofs that regenerates by absorbing water, with which it seeks to solve the problem of the damage generated by rain each year to the pavement of cities.

On the other hand, Briseño won several awards. Among them is the first place in the James Dyson-Mexico; it is an international competition whose mission is to encourage young engineers to create innovative products to solve common problems.

Paflec consists of a material that allows, by means of chemical reactions, the pavement to be repaired when it comes into contact with water; in addition, it is made with the rubber of the car covers so it is also a way to treat this waste.

The mixture can be placed on the cracks and potholes so that, with the arrival of the water, they are automatically repaired.

It is worth mentioning that, although the pavements that are regenerated already existed before Paflec, the one in Briseño is different. This, Briseño said, is due to the use of the used covers.

Briseño, was inspired by the idea of concrete that can be regenerated with the help of bacteria and looked for how to start the procedure without having bacteria in the equation. When he realized he could make a rubber formula detach a putty to fill holes in fractured asphalt, that’s when he realized he had a potential business on his hands.

When in contact with water, rubber creates calcium silicates, the essential component for asphalt regeneration. But at first, Briseño ruled out using rubber and considered instead occupying pure asphalt mixed with additives.

He later discovered that using rubber would be much less polluting so he re-designed the project resulting in Paflec.

Antonio Briseño already has a business model where he seeks to charge 5% of what the work costs, however, so far, he has not finalized an alliance with a construction company for certification needs and bidding issues.

Briseño, created a three-phase plan, where he explains that the first is to go with an engineer and solve doubts, and at the same time build a road or a small section to see if it works. If this works, move to the second phase which would be to certify it before those who certify the construction products, and the third step give the SCT with its technical file endorsed to authorize the tenders of your project.

If this is achieved, it would combat one of the many problems experienced by large cities. We applaud projects such as Briseño where the resolution of everyday problems and the recycling of existing materials are combined.