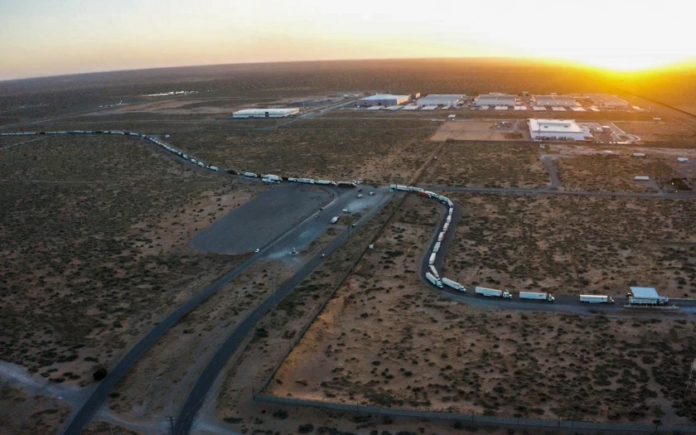 Despite the fact that Texas is the second state in the American Union, with the largest presence of the Mexican-American community with almost 8 million people, representing 28% of the Texan population, most of its recent governments, with the exception of George Bush, could be qualified as anti-Mexican immigrants. The current governor, Greg Abbott, is perhaps one of the most. The evidence abounds.

Certainly, his recent actions are guided by the desire to be re-elected and, as a central part of those strategies, to oppose Joe Biden, whom he accuses in an almost personal way of the disorder on the border with Mexico, of which Texas occupies a large part. Under this perspective, it would be a matter of internal politics. To make it clear that the US federal government is not doing enough, he sent a truckload of undocumented migrants caught at the Texas border to the US capital. In reality, it is more than an internal matter for the United States.

Another of his measures, with devastating impacts on Mexico, was the imposition of intentionally slow and exhaustive inspections of cargo trucks coming from Mexico. These inspections mean that these trucks cannot enter quickly and that they remain in Mexico, causing all possible problems. The economic damage to border life, among others, is enormous. The governor knows this and says bluntly that this is to pressure for more to be done, in Mexico and in the United States, to control and stop migratory flows. The Trump School. Either you detain migrants or it hurts you financially.

As the bad example spreads, just as Governor Abbott “imposed” sanctions ala Trump, with economic effects on Mexico, the state governors of northern Mexico, following the example of AMLO, went to beg him (an expression that Abbott himself used ) to suspend these inspections and in exchange, they promised to control migratory flows.

Even understanding the desperation of the governors of northern Mexico, several questions arise.

And the chancellery? The federal government, up to the time of this writing, has remained on the sidelines of these agreements and of the problem itself. As if they had nothing to do with it. Neither the Ministry of Foreign Affairs nor the Ministry of Economy (directly involved), have said absolutely nothing. In what in practice are international agreements, the Mexican Foreign Ministry does not even appear as a witness of honor.

The Mexican federal officials who only live to guess AMLO’s mind, surely take refuge in the well-worn argument that it is about internal affairs between the Texan governor and the president of the United States and that there is no need to interfere. It matters little that this affects Mexico. In the Mexican president’s conferences every morning, they talk about the content of radio programs or how some communicator lives, but not about the thousands of trucks stopped at the border and the economic damage to our country.

On the other hand, it would be good to review the legality of these agreements. Not only because the federal government, responsible for foreign policy, is not invited, or because the Mexican Senate, which should also play a role in that policy, is not even notified, but because the governors commit to actions for which they have no power. no attributions. The migratory control that Abbott asks of them and that they graciously grant, is of federal competence, not state. In addition, a large part of the migrants who pass through these states are Mexican, at least 40% of them. are they going to stop them? Thus violating the principle of free movement of Mexicans in its territory, which the constitution clearly establishes?

The governors did not go on to explain the immigration process or convince Abbott that rigid control is not the solution and that, on the contrary, it generates other even more serious problems. There is a lot of history to prove it. No, following the example of AMLO, they went to subordinate themselves and promise what, moreover, they cannot fulfill and expose migrants who are already vulnerable.

If the effects of the participation of the National Guard in the control of migratory flows have been disastrous for migrants in transit, the experiences of the interventions of local and state authorities are even worse and considerably increase the vulnerability of migrants and the participation of organized crime.

Let us not forget that, particularly in the states bordering Texas such as Coahuila, Chihuahua, or Tamaulipas, and to a lesser extent Nuevo León, with a tiny border, these are territories controlled by criminal organizations.

For now, Governor Abbott achieved his political objective and has already announced, as Trump did, that if the governors’ commitments are not fulfilled, he will resume inspections. It is a way of telling Biden, but above all to the voters, that this is the way to go, to subdue Mexico.