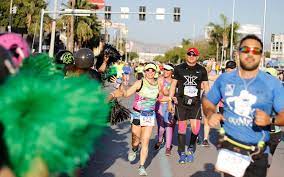 The countdown begins for the “Fiesta Lagunera”

Torreon, Coahuila. – The Lala Marathon, also known as “la Laguna Fiesta”, is one of the most important athletic events not only in the region but also internationally and this year 2022 will celebrate its 33rd edition on March 6 with a total of 4 thousand 500 runners (70% of the number that usually participate), both local and foreign.

Thus, with the help of the director of the fair, María Luisa Marroquín, the ribbon-cutting ceremony was held in a renowned shopping center in Torreón to inaugurate another edition, which received athletes from all over the Mexican Republic and countries such as Costa Rica. , Guatemala Colombia, Venezuela, the United States and Kenya, ready to enjoy a new adventure in the lagoon land starting at the Grupo Lala facilities in the Parque Industrial Lagunero de Gómez Palacio starting at 6:35 a.m. for the categories with disabilities and 6:45 for the rest.

And it is that, whether for health, tradition, identity or hobby, the Marathon brings together thousands of stories in its 42 kilometers and 195 meters traveled, crossing the cities of Gómez Palacio and Lerdo, in the state of Durango, and the municipality of Torreón, in Coahuila, a route traced since its foundation in 1989 by the hand of Ramón Iriarte who, supported by Germán González Navarro, sought to deliver something healthy to the community that would last through time.

it is added that it is a Mexican marathon recognized by the Association of International Marathons and Distance Races (AIMS, for its acronym in English), due to its social commitment, also highlighting factors such as the economic one, which involves sponsors and the It pours money into lodging costs for foreigners, prizes for the winners and expenses in carrying out the race. And it is that only from 2012 to 2017 there was an increase of 29% in the number of registrations, with 2011 being the edition with a lower number. “It is one of the most important Marathons in Mexico, it could have been 10,000 runners long ago. Not so many people come because of the city’s hotel capacity and it has to be limited. At the time it was the fastest in Latin America. There are even more foreign people than locals, because it has that projection”, explained Luis Pineda, Coordinator of Elite Athletes who also announced that for this edition there will be a duel between a runner from Torreon and a Kenyan in the Women’s Branch, while in the men’s more even the competition.

“In the Women’s Branch we are going to see a Torreón duel against Kenya: Argentina Valdepeñas confirmed its participation and goes against the Kenyan Scola Jepkemoi, both with a pace of 2:37. Among them is victory. In the Men’s Branch, there are seven boys who go between 2:25 and 2:30, highlighting those who were third, fourth and fifth in the last edition Raúl Pérez López, Efraín Orduña and Marco Antonio Martínez, from the State of Mexico, Coahuila and Tlaxcala. Two of them come from Costa Rica, and Jorge Alberto Hernández, who three years ago was disqualified from the Marathon, had been leading but had a different number. He will be another contender.”

It should be noted that during the delivery of the kits, all the sanitary protocols were followed to prevent Covid-19, highlighting that emergency tests were being carried out on the runners since it was mandatory to present proof of the Antigen Test with a negative result, carried out 72 hours before the event.