By Matt Rivers for CNN

CNN.- As the United States slowly re-opens its economy, the messaging from health experts has been largely consistent — to do so safely over the long term, millions more tests are needed.

But as its neighbor Mexico is set to re-open its own economy in a few short weeks, the message from top health officials there couldn’t be more different — mass testing is not only unnecessary, it is largely a waste of time.

Dr. Hugo Lopez-Gatell, Mexico’s top epidemiologist and the public face of its Covid-19 response, sat down with CNN for his first network TV interview two days before the government announced plans on how it would re-open.Certain industries deemed essential, like car parts manufacturing and construction, will be allowed to re-open starting June 1. Other sections of the economy will follow in phases during the weeks after.

Mexican health officials believe the outbreak will peak in this country no later than May 20, though some studies suggest it could arrive in late June, even as the country has one of the lowest testing rates in the world.

“I don’t think testing is a must,” Lopez-Gatell said when asked if the country could re-open safely without more tests. “This doesn’t mean we’re resistant to testing, we will use testing but in a carefully planned manner.”As of May 11, Mexico had only conducted 89 tests per 100,000 people, according to health ministry data. By contrast, the US tested at a rate nearly 32 times higher than that, according to the COVID Tracking Project.

The government strategy is to mainly test only those with severe symptoms of the virus while monitoring people with suspected but undiagnosed cases of Covid-19, thereby creating a sample.The data from that sample is then extrapolated to apply to a wider population using modeling, Lopez-Gatell said. The idea is to give the government a view of what is happening in a broader area without spending resources on mass testing.”It is nonsensical to do test after test after test when most of those tests will result in a negative result,” said Lopez-Gatell. “It is quite inefficient as an assessment strategy.

“The plan is consistent with Mexico’s testing strategy since the beginning of the outbreak.As of Thursday night, Mexico had confirmed more then 42,500 positive cases after only testing roughly 156,000 people.Lopez-Gatell said the actual case total might well be into the millions, but that setting response policy does not require knowing the exact number of potential cases; knowing it’s sufficiently high to take drastic action is enough.

He said that is why the government forced schools and most non-essential businesses to close in March and has since urged people to stay home.But the lack of testing has prompted criticism that a dearth of confirmed data has left the government with, at best, an incomplete view of how bad the outbreak is just weeks before the country will start to re-open.”That’s worrisome because it means that we don’t have the full grasp of the magnitude of how much the disease has spread,” said Dr. Julio Frenk, Mexico’s former health minister from 2000 to 2006. 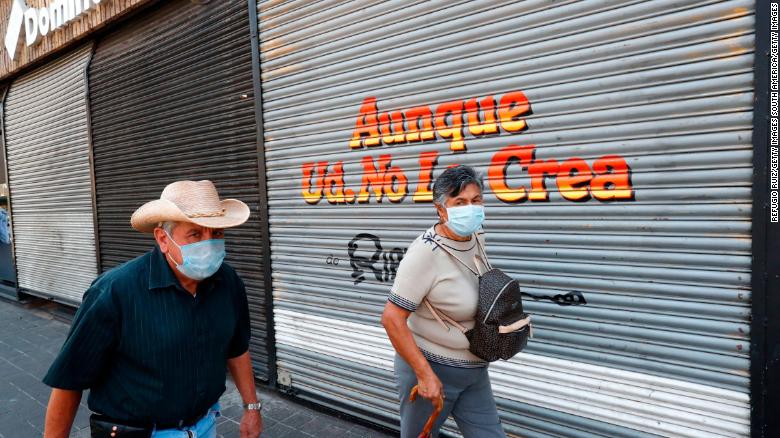 People walk by a closed store during the pandemic in Guadalajara City, Mexico.The US federal government has also faced criticism for insufficient testing in past months. But while President Donald Trump on Thursday questioned if testing was “overrated,” top health officials in his administration still emphasize its importance.

“Rapid, extensive and widely available, timely testing is essential for reopening America,” Dr. Robert Redfield, the director of the CDC, told US senators at a committee hearing on Tuesday.At the same hearing, Dr. Anthony Fauci, the US’ top epidemiologist and member of the White House’s coronavirus task force, also said mass testing will be key to state and local governments’ responses to future outbreaks: “When you are in the process of opening up and pulling back on mitigation, you really must have in place that capability of responding when you do have the inevitable upticks in cases that will absolutely occur,” he said.

The hope is to provide Americans with 12.9 million tests by mid-June and by September will have a nationwide ability to conduct 40-50 million tests per month if needed, US testing czar Brett Giroir has said. States and municipalities across the US are also planning on building so-called contact tracing armies, where trained personnel fan out across the US, identifying new cases and isolating those people as well as those who they’ve come in contact with.

But Mexico has no publicly known plans to do that on a large scale, though officials say they do contract tracing among those suspected and confirmed cases.

“Test, trace, isolate, repeat,” said Dr. Jennifer Nuzzo, a Johns Hopkins epidemiologist, when asked about what Mexico needed to do to prevent additional Covid-19 outbreaks in the future. “All of those things need to happen and [the Mexican government] will need to do more testing to make that happen.”Lopez-Gatell flatly rejects the idea the only way to re-open safely is through mass testing, though he added he greatly respects the experts who assert that.

“Of course there is always the risk of having an outbreak again but we will be able to carefully monitor the re-opening so when any outbreak occurs, we take action,” he said.His contention: it’s far too early in this pandemic to know which approach will ultimately prove more successful or whether both might work.

“I would say don’t jump to conclusions just based on how famous one approach is as opposed to another,” Lopez-Gatell told CNN.

“Let’s wait for the global public health community … to have scientific discussions to see what are the best experiences that one can learn from for the present and for the future.”

Proof of vaccination certificate being implemented in Mexico: in which states will it be mandatory

Mexican Government Website to Register for the COVID Vaccine

Mexico agreed with a U.N. proposal to delay shipments of the Pfizer coronavirus vaccine