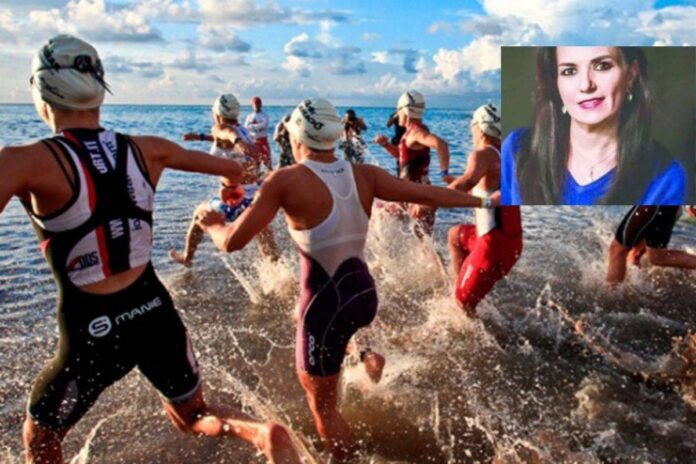 A Mexican woman died of a heart attack during the weekend in the triathlon competition “Ironman 70.3” on the tourist island of Cozumel in Quintana Roo.

The 51-year-old athlete and philanthropist Leticia Rico González was pulled out of the water while doing the swimming test on the first day of the competition and was taken to a hospital where her death was confirmed.

The Mexican Center for Philanthropy ( Cemefi ) of which Rico González was a member, lamented the death and sent condolences to the athlete’s family, originally from the city of Saltillo in the state of Coahuila.

In addition to being an athlete, the woman was president of the Merced Foundation and had experience in new models of strategic philanthropy and social development.

The “Ironman” triathlon is a series of races organized by the World Triathlon Corporation. Participants have to cover three distances of hundreds of kilometers in swimming, cycling, and running. Only the most trained can do it since their tests require advanced physical conditions.

Press reports indicate that it is not the first time that an athlete has lost his life in an event of this nature in Cozumel, which the organizing company AsDeporte has always kept hermetic.

It is unknown whether athletes who pay a good amount for their registration are entitled to life insurance. In the past, Jaime Cadaval Baeza, President of the Mexican Triathlon Federation, has been upset with the media in the face of uncomfortable questions when a death occurs in full competition

The footprint that Saltillo philanthropist Leticia Rico leaves in Coahuila

Leticia Rico González’s passion for strengthening social development through new models of strategic philanthropy left its mark in Coahuila and marked a change during her tenure at Fundación Merced as president.

However, the irreparable loss of the professional in the development of social investment goes further, touching the hearts of those who knew her work and learned from her on their professional path.

Dozens of comments at the bottom of the news of his sudden death on September 25, during his participation in the Ironman 70.3 event, in Cozumel, Quintana Roo, expressed their condolences and the desire for a speedy resignation for his family.

For its part, the board of directors and operational team of Fundación Merced Coahuila joined in the grief that the Morales Rico and Rico González family have for the death of a brilliant lady, who dedicated an obituary on their official Facebook page.

“Dear Lety, rest in peace,” wrote hundreds of netizens waiting for the appointment at her funeral in which they will be able to say goodbye to their partner and friend, who also thanked the time and experience shared in life.

Similarly, the professional firm of administrative and fiscal services, Morales-Sainz, lamented the sensitive death of the 51-year-old president.

“You will not be present among us but we will remember you with deep affection,” said the firm on its social networks, where also, friends and acquaintances asked for his eternal rest and sent his family their condolences for the sudden and irreparable loss.

“Rest in peace Lety, thank you for your friendship, your love and your example. Thank you for always trusting me and for your support. A kiss to heaven ”, wrote Elyza Betty G, in her social networks, like other professionals, witnesses of her commitment to society.

Netizens describe her as an entrepreneurial woman and passionate about philanthropy, but above all a warm and simple person with those around her.

His footprint was also recognized by the Mexican Center for Philanthropy, an organization that deeply regretted his death, sending his entire family condolences with sorrow and sadness for losing an active and committed member.

The well-known philanthropist completed her university studies at Tecnológico de Monterrey as a Public Accountant, she had great skill and experience in matters of social development and new models of strategic philanthropy.

The Saltillo athlete also suffered a heart attack in the waters of the Caribbean Sea, when she participated in the swimming event of the Ironman 70.3 event, in Cozumel, Quintana Roo.

Another 25 people from Saltillo also participated in the event and it was held on Saturday and Sunday in Cozumel, where Leticia was unable to recover after suffering a heart attack in the waters of the Caribbean Sea. The irreparable loss of the professional in the development of social investment, today goes further by touching the hearts of those who knew her work.