The entity managed to remain on a green epidemiological alert for a full eight weeks.

The coronavirus pandemic in Mexico has raged during the first weeks of 2021, generating havoc in a good part of the states of the Republic. The state of Chiapas had been on a green epidemiological traffic light for eight weeks, but, given the increase in cases, the government was forced to declare a yellow alert.

This means that measures and strategies aimed at stopping the spread of the virus will be strengthened in the state territory. This level of alert will remain for the next two weeks, that is, from January 18 to 31, reported the state Health Secretariat.

Only in the last 24 hours, Chiapas registered 14 people infected by SARS-CoV-2 and two deaths. These were presented in San Cristóbal de Las Casas and Tuxtla Gutiérrez, five each; and Berriozábal, Chalchihuitán, San Andrés Larráinzar and Villaflores, one case each municipality.

Those infected are eight women and six men, all over 25 years of age. Nine of them have some risk factor such as diabetes, hypertension, asthma, obesity, chronic obstructive pulmonary disease, hyperthyroidism and kidney failure.

Since the health emergency began, the state has registered 7,647 sick and 608 deaths , which positions it as one of the places where COVID-19 has affected the least intensity.

Regarding the last two deaths, the Ministry of Health reported that they occurred in two women, 51 and 74 years old. The first of them is a resident of Cintalapa and suffered from diabetes.

In an interview with the Heraldo de Chiapas , the head of the High Health District II, Octavio Alberto Coutiño Niño, reported that in the face of the new scenario, the “Winter Reinforcement Plan for the Containment of COVID-19” would begin.

“The goal is to cover a population of 197,583 inhabitants. From January 18 to February 28, the 45,250 homes of the city divided into 7 zones and 42 subregions will be visited to diagnose suspected cases, provide the necessary advice and management; establish immediate outpatient medical treatment when the disease is verified ”, commented to the journalist Isaí López. 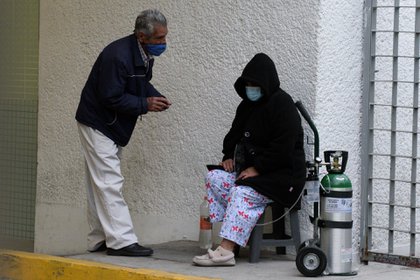 The government decreed the yellow traffic light due to an increase in COVID-19 (Photo: Cuartoscuro)

For this new epidemiological stage, the authorities called on the population to follow the sanitary protocols and the measures dictated by the sanitary institutions.

Among these is, the opening of supermarkets, but with the access of one person per family ; 75% occupancy of hotels, restaurants, cafes , aesthetics, parks, squares, gyms, sports centers and spas and 50% capacity of places such as cinemas, theaters, museums, shopping centers, churches, concerts, amusement parks, etc. .

Mexico is going through a critical situation due to COVID-19. Its figures have positioned it among the countries most affected by the pandemic. According to the latest report from the Ministry of Health (SSa), in the last 24 hours, 19,244 positive cases of the disease and 1,007 deaths were registered , which accumulates in the country one million 649,502 accumulated and more than 141,000 deaths.

Currently, the only entity that continues with a green epidemiological traffic light is Campeche, which has managed to maintain that panorama for several weeks.