In the heart of the central highlands of Mexico, El Charco del Ingenio Botanical Garden includes over 170 acres of nature preserve in the historical town of San Miguel de Allende.  An extraordinary natural monument, its name comes from a legendary spring-fed pool nestled in an impressive canyon spotted byhistoric vestiges. An old reservoir extends on wetlands frequented by birds and surrounded by vast slopes of native scrubland.  This is the scene of the Botanical Garden, devoted to the preservation of this area and its biodiversity, as well as a remarkable botanical collection of cacti and other succulent Mexican plants. The Garden holds environmental education programs aimed to the youngest, and a wide range of activities along the year reflecting the multicultural character of San Miguel.  A unique place for strolling, jogging, hiking, meditating or simply enjoying a peaceful time in Nature, El Charco also has a giftshop and a cafeteria.

It was a local initiative born in 1990 which resolved to rescue and protect a unique area of great environmental, scenic and historical value, open to all as a community resource.  An independent Mexican nonprofit, El Charco del Ingenio AC, owns and manages this land and its facilities, committed to preserve an outstanding natural and cultural heritage of San Miguel de Allende.

The non-profit has received several awards and recognitions through the years.  It is a member of the Mexican Association of Botanical Gardens and Botanic Garden Conservation International.  It has joined the GlobaI Strategy for Botanical Gardens in Conservation, sponsored by the U.N.  El Charco is registered at the Federal Environmental Agency (SEMARNAT) as a Conservation Management Unit (UMA).

THE BIRTH OF A GARDEN

The task of establishing a botanical garden and nature conservation area in San Miguel de Allende was started in 1989 by Cante A.C., a Mexican nonprofit organization with diverse ecological and cultural interests, founded by Federico Gama and César Arias. The impressive canyon of El Charco del Ingenio, both close yet isolated from the town, appeared as the ideal place for the proposed project – an area of great natural beauty, of ecological, scenic and historical value, in danger of being swallowed up by the irrepressible urban sprawl of the city.

Thanks to timely economic assistance, Cante was able to acquire various parcels of land amounting to about 30 hectares above the cliffs and escarpments of the canyon. Despite its rural nature, much of the land had been seriously affected by human activity – tree felling, removal of soil, hunting, overgrazing, fire, and accumulation of litter … and all this resulted in serious disturbance to local flora and fauna, especially in the upper parts of the canyon, exposed to erosion and the effects of an increasingly arid and extreme climate.

The original project took shape through a master plan of landscape design, carried out by the architects Alejandro Cabeza and Enrique Pliego. The plan visualized an extensive botanical garden surrounded by a conservation zone – a place dedicated to the study, appreciation and enjoyment of nature, open to the local population. The area’s undoubted tourism potential was likewise proposed as a sustainable option.

The initiative to create a botanical garden in San Miguel de Allende was supported from the outset by the Mexican Environment Agency which authorized the necessary registration and permits to collect plants in the arid and semiarid regions of Mexico. This was done in conjunction with the Botanical Garden of the National University of Mexico (UNAM). With these first few specimens, the garden began to build its collection of plants.

The extensive landholding, its extreme topography and the existence of wetlands provide a varied ecosystem, with a surprising variety of flora and fauna. Through the years, indigenous flora has gradually re-established itself in a natural manner, with some inducement, replacing forage grasses and other invasive species. The ecosystem is undergoing a process of healthy regeneration and plants that seemed to have disappeared reappear year by year. The most recent scientific studies made in the area indicate an increasing number of species of flora and fauna, many of them endemic, threatened or in danger of extinction.

Some of the damaged areas of the botanical garden and Parque Landeta have been designated as areas for reforestation with trees and shrubs native to the bio-region, especially those that have been propagated in the garden’s nursery and are resistant to drought, poor soils and the extreme climate of this area. They are part of experimental and demonstration plots of an arboretum dedicated to the study of the characteristics and potentials of such species.

These conservation efforts and the promotion of natural resources has received recognition: from thousands of visitors from many different places who come to the Charco, as well as in various publications, and national and international conservation groups and institutions. In 1995, Cante received the National Prize for Ecological Merit from the Mexican government in recognition of its work.

The size and complexity of the project eventually made it necessary to create a new organization independent of Cante, dedicated specifically to the development of the botanical garden. Therefore a new nonprofit nongovernmental organization was formed in 1998, El Charco del Ingenio A.C., made up of new associates from San Miguel. The nascent organization received in donation all of the land and facilities which make up the botanical garden as well as the valuable collection of Mexican plants, whose care and management was authorized the following year by the Mexican Environment Agency (SEMARNAT) through the designation of the garden as a “management unit for wildlife conservation” (UMA for its initials in Spanish).

The new organization owns and manages the botanical garden, focusing its efforts on autonomy.  With diverse sources of income, it has aimed for sustainable self-financing of the environmental conservation project. It has also built up a trained staff, each with responsibility for specific tasks in the garden (attention to the public, maintenance, propagation, management of flora and fauna, etc.), supported by Mexican college students contributing volunteer social service work, and by other volunteers from many other places.

Along with its primary work of natural resources management, the garden also has a social function as a community gathering place for San Miguel de Allende. In addition to various activities that take place through the year, the garden is the site of the Environmental Education Program of San Miguel de Allende (PEASMA for its initials in Spanish). This innovative program combines values and practices of popular cultural with new alternative technologies and is principally aimed at children and youth of school age in the municipality, who learn about the reasons and techniques for carrying out environmental conservation.

The daily presence of out-of-town visitors, both Mexican and foreign, is complemented by a growing number of local users who come to the site for various reasons – above all, for relaxation in Parque Landeta, an ample and popular recreational space with facilities for hiking, gatherings, picnics and camping.

And in 2005, after years of petitions by the botanical garden, a large area around El Charco del Ingenio was declared by the San Miguel de Allende City Council to be an Ecological Preservation Zone, regulated by a Management Plan and comprising a greenbelt buffer zone where urban development is subject to special restrictions. Thus we seek to preserve this magnificent place as the natural and historical heritage of San Miguel.

The Botanical Garden of El Charco del Ingenio builds itself day by day as a unique and open space with points of interest for everyone: a natural monument, a wildlife habitat, a botanical collection, a historical site, a center of environmental education, and a recreational space for all the community. As envisioned at its inception, it remains an autonomous popular initiative, supported to a large degree by the contributions of its visitors and friends – a silent driving force that helps it to flourish. 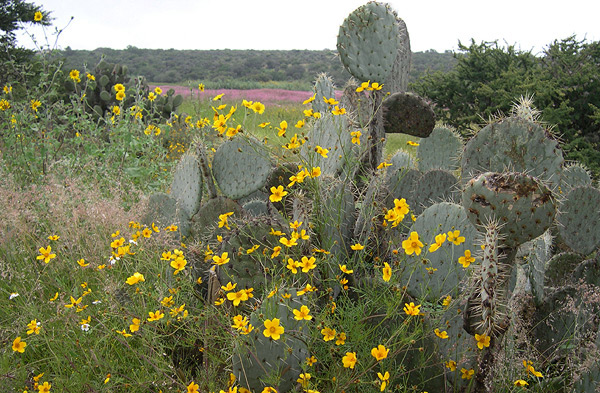